Animal Stereotypes and The Surprising Truth

Some animals get a bad rap either due to their appearance, the way they are depicted in movies, or other pop culture references. The way we tend to view animals can be wildly inaccurate. There is often a wide gap between our stereotypes of animals and how they actually behave. Animals that we view as majestic or adorable can be some of the most despicable in the natural world, where others that are considered lowly, disgusting, or dishonorable are worthy of more respect.

Rats are an all-too-common pest that have garnered a reputation as filthy, disgusting, and treacherous. As exterminators we at Arrow are often in the position of eradicating rats. Despite this we respect the intelligence of an animal that has survived for so long, living alongside humans, despite humanity’s constant attempts to wipe them out. They even compete with humans for resources, using the same shelter and seeking the same food sources.Some species of mice and rats have adapted so well to their urban lifestyle that they would no longer be able to survive in nature away from human habitation.

Rats are frequently used in laboratories in part because they possess higher intellectual functions normally only found in primates, dolphins, humans, and other “apex” species. Although people often refer to someone as a “rat” to indicate that they are untrustworthy or dishonorable, some studies suggest that rats may be one of the few species capable of empathy. In laboratory settings free rats can be seen liberating other rats from their cages even if there is no clear benefit in doing so. One type of rat has even been trained to detect land mines and tuberculosis in developing countries.

Lions are seen as majestic, whereas movies such as the Lion King portray hyenas as low-down thieves always scheming to rob the lions of their kills. The reality, long known to biologists, is that hyenas hunt before dawn and more often it is the lions that chase the hyenas away from their meals. As the sun rises the hyenas can be viewed trying to reclaim their kill and for this reason they are often mistaken as the aggressor.

Chimpanzees v Gorillas– Perhaps owing to their appearance if not pop culture references, we tend to think of Chimpanzees as cute, harmless, and childlike. Gorillas, by contrast, are thought of as cruel, brutish oafs. This is another example of just how wrong our animal prejudices can be. Chimpanzees are highly aggressive among themselves, and in times of famine wild chimps have even been known to steal human babies for food. Gorillas, on the other hand, posses uncanny intelligence can even understand English and use sign language.

Deer are another animal that appear cute but in reality can be quite vicious towards each-other, with highly aggressive mating habits and constant battles for dominance. 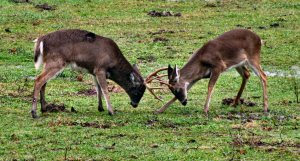 By Brian Stansberry (Own work) [CC-BY-3.0 (http://creativecommons.org/licenses/by/3.0)%5D, via Wikimedia Commons